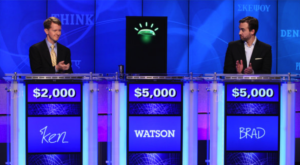 Ken Jennings holds the record for the longest winning streak on the TV game show Jeopardy! with 74 straight victories in 2004. Jennings’ historic string of wins resulted in total cash winnings of $2,520,700. His breadth of knowledge (and in some cases, timely wagers) made him one of the best, if not the best, contestants to ever play Jeopardy! His success may only be second to Brad Rutter, winner of 19 regular season and tournament games of Jeopardy!

On February 14th, 2011, both Rutter and Jennings were introduced to their greatest trivia opponent: Watson, an IBM supercomputer equipped with cognitive computing capability. Watson can analyze astronomical volumes of data with a more human-like cognition, including natural language processing, hypotheses generation, and intuitive machine learning. At the very base level, Watson is a textbook example of a computer powerful enough to sort and learn from the 2.5 quintillion bytes of data being created every day.

Watson more than held its own against Rutter and Jennings winning the $1,000,000 cash prize. IBM donated Watson’s total winnings to charity, but the value of Watson’s win goes far beyond any cash prizes. It showed the world the power of Natural Language Processing (NLP).

What is Watson’s Purpose?

It wasn’t long after Watson’s win over Ken Jennings and Brad Rutter on Jeopardy! that IBM elected to transition Watson’s purpose. To simply call IBM’s solution ‘Watson’ misses one important detail: there are actually two distinct units from IBM. Watson is home to cloud-based cognitive computing technologies while Watson Health is dedicated to aiding physicians, researchers, and insurance providers in personal health data and analysis.

The grim reality is that IBM needed Watson to wow and win the world as much as any other product in their illustrious history. With innovative technologies pulling more of IBM’s traditional IT business into the cloud, IBM recognized the need to re-create its relevancy. Since Watson’s roaring success at Jeopardy!, IBM has integrated a suite of services with Watson’s name recognition.

What gives Watson influence on the world around us is how capable and efficient it is at processing real-life problems. It would be easy to assume that Watson’s responses would be grounded in data alone. The amazing reality is that Watson’s natural language processing (NLP) and data learning algorithms create an interactive experience that probably rivals the communication and interaction levels of many humans.

Artificial intelligence is helping reprogram amputees’ brains to adopt a robotic arm. Machines are learning like humans with greater cognition capabilities. Exoskeletons are giving paralyzed children the ability to walk again. A voice-activated intelligence system is now capable of bringing your car to wherever you are. A supercomputer is helping diagnose cases of cancer at up to four times more accurately than the average medical professional.

How Data Is Transforming Business & The World

This may all sound like science fiction. It’s not. It’s how data is transforming the world of today. As more businesses understand the immense value of data, they will need more advanced systems to collect and analyze structured and unstructured data for real-life implementation.

How much easier would your life be if you could have any conversation at any time and the other person understood you perfectly every time?

How much confidence would you have knowing that your words were received exactly the way you meant them?

Now, imagine if that other person was actually a computer. No more shouting the same business via Bluetooth. No more repeating yourself slowly and painstakingly so Siri can do a simple search through Google. Natural Language Processing is about giving computers the information (data) they need to understand humans and communicate their responses like a human would.

Talk-to-text technology has unlimited applications in today’s world, but how well can your phone, tablet, or computer align with your spoken communication? The ability to communicate with a computer as if it were human is no longer science fiction. The question is how realistic and accurate the experience may be.

Natural Language Processing (NLP) believes that computers have the end-capacity to communicate in human language with the same user experience. To put it simply, NLP is meant to replace the need to edit and double-check a computer’s work. It means that your virtual assistant could truly become an AI assistant that you don’t ever have to check up on.  Natural Language Processing is meant to use the data of language communication in the most human way possible to better impact user experiences in search, mobile, apps, marketing, and translations, among other applications. The goal of Natural Language Processing is for humans to be able to communicate with computers as if they were human, arguably the pinnacle of Artificial Intelligence (AI).

Currently, there is a company called x.ai that is doing just that. They have created a virtual AI assistant called Amy Ingram (AI) that will schedule appointments for you. “She” can communicate just like a human can. You wouldn’t even know you were communicating with an AI system while talking with Amy.

“Our syntactic systems predict part-of-speech tags for each word in a given sentence, as well as morphological features such as gender and number. They also label relationships between words, such as subject, object, modification, and others. We focus on efficient algorithms that leverage large amounts of unlabeled data, and recently have incorporated neural net technology.

On the semantic side, we identify entities in free text, label them with types (such as person, location, or organization), cluster mentions of those entities within and across documents (coreference resolution), and resolve the entities to the Knowledge Graph.

Recent work has focused on incorporating multiple sources of knowledge and information to aid with analysis of text, as well as applying frame semantics at the noun phrase, sentence, and document level.”

“…to design and build software that will analyze, understand, and generate languages that humans use naturally, so that eventually you will be able to address your computer as though you were addressing another person.”

If a restaurant has an automated NLP-based menu-ordering kiosk, the ability of the data processing computer to accurately understand a patron’s spoken order is crucial to the patron’s dinner arriving in the exact detail that they requested. Think of how many times you’ve tried to talk with Siri or Cortana only to have them provide inaccurate search queries or map directions. Natural Language Processing helps clients experience the same level of service from entry-level human servers with the convenience of leveraging data and time for greater profit.

This article is an excerpt from NEO founder Jesse Morris’ new book Data and the World of Today: The Reality of Today that will Impact your Business Tomorrow. Purchase your copy via Amazon.com.